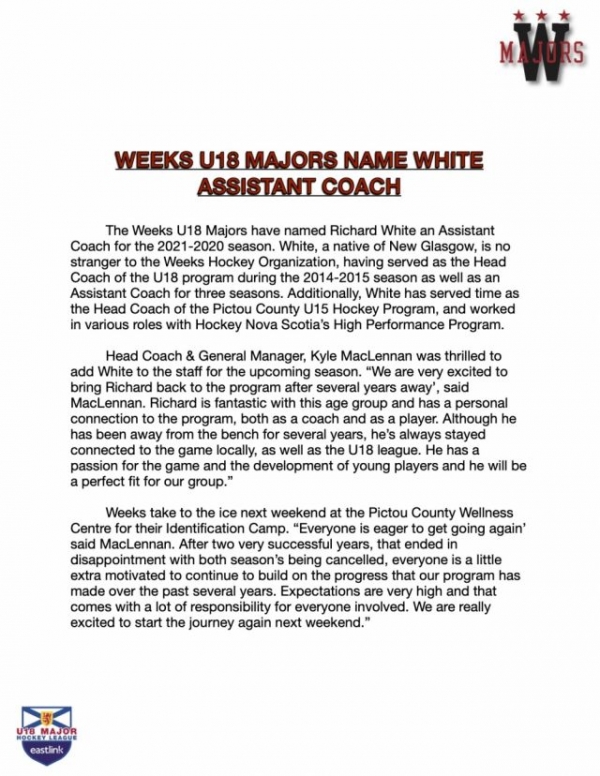 The Weeks U18 Majors have named Richard White an Assistant Coach for the 2021-2020 season. White, a native of New Glasgow, is no stranger to the Weeks Hockey Organization, having served as the Head Coach of the U18 program during the 2014-2015 season as well as an Assistant Coach for three seasons. Additionally, White has served time as the Head Coach of the Pictou County U15 Hockey Program, and worked in various roles with Hockey Nova Scotia’s High Performance Program.

Head Coach & General Manager, Kyle MacLennan was thrilled to add White to the staff for the upcoming season. “We are very excited to bring Richard back to the program after several years away’, said MacLennan. Richard is fantastic with this age group and has a personal connection to the program, both as a coach and as a player. Although he has been away from the bench for several years, he’s always stayed connected to the game locally, as well as the U18 league. He has a passion for the game and the development of young players and he will be a perfect fit for our group.”

Weeks take to the ice next weekend at the Pictou County Wellness Centre for their Identification Camp. “Everyone is eager to get going again’ said MacLennan. After two very successful years, that ended in disappointment with both season’s being cancelled, everyone is a little extra motivated to continue to build on the progress that our program has made over the past several years. Expectations are very high and that comes with a lot of responsibility for everyone involved. We are really excited to start the journey again next weekend.”