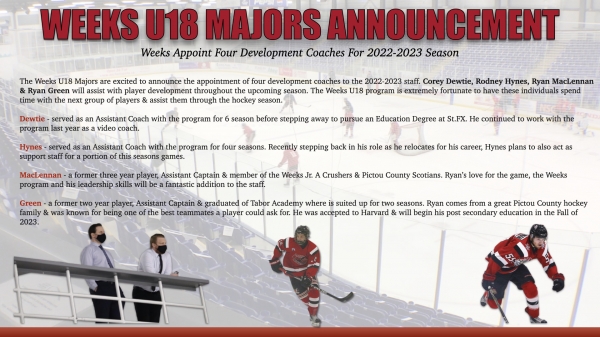 The Weeks U18 Majors are excited to announce the appointment of four development coaches to the 2022-2023 staff. Corey Dewtie, Rodney Hynes, Ryan MacLennan & Ryan Green will assist with player development throughout the upcoming season. The Weeks U18 program is extremely fortunate to have these individuals spend time with the next group of players & assist them through the hockey season.聽

Dewtie - served as an Assistant Coach with the program for six seasons before stepping away to pursue an Education Degree at St.FX. He continued to work with the program last year as a video coach.

Hynes - served as an Assistant Coach with the program for four seasons. Recently stepping back in his role as he relocates for his career, Hynes plans to also act as support staff for a portion of this seasons games.聽

MacLennan - a former three year player, Assistant Captain & member of the Weeks Jr. A Crushers & Pictou County Scotians. Ryan鈥檚 love for the game, the Weeks program and his leadership skills will be a fantastic addition to the staff.

Green - a former two year player, Assistant Captain & graduated of Tabor Academy where is suited up for two seasons. Ryan comes from a great Pictou County hockey family & was known for being one of the best teammates a player could ask for. He was accepted to Harvard & will begin his post secondary education in the Fall of 2023.