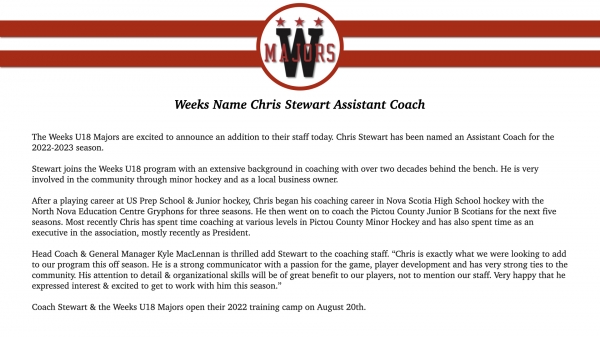 The Weeks U18 Majors are excited to announce an addition to their staff today. Chris Stewart has been named an Assistant Coach for the 2022-2023 season.

Stewart joins the Weeks U18 program with an extensive background in coaching with over two decades behind the bench. He is very involved in the community through minor hockey and as a local business owner.

After a playing career at US Prep School & Junior hockey, Chris began his coaching career in Nova Scotia High School hockey with the North Nova Education Centre Gryphons for three seasons. He then went on to coach the Pictou County Junior B Scotians for the next five seasons. Most recently Chris has spent time coaching at various levels in Pictou County Minor Hockey and has also spent time as an executive in the association, mostly recently as President.

Head Coach & General Manager Kyle MacLennan is thrilled add Stewart to the coaching staff. “Chris is exactly what we were looking to add to our program this off season. He is a strong communicator with a passion for the game, player development and has very strong ties to the community. His attention to detail & organizational skills will be of great benefit to our players, not to mention our staff. Very happy that he expressed interest & excited to get to work with him this season.”

Coach Stewart & the Weeks U18 Majors open their 2022 training camp on August 20th.