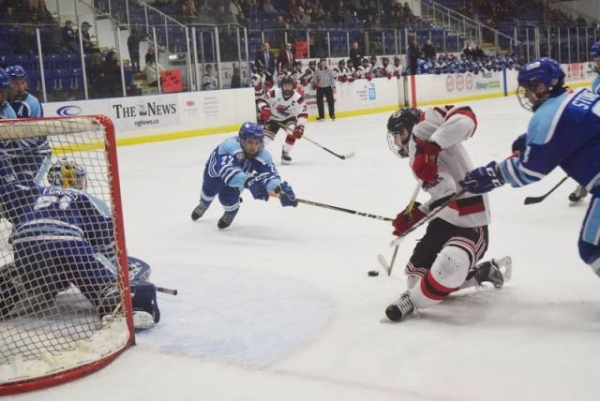 WESTVILLE, N.S. – Those counted on to produce got it done.

Merle Putnam scored twice and set up two others and Landon Sim had a goal and three assists as the Pictou County Weeks Major Midgets won Game 7 of their Nova Scotia Major Midget Hockey League playoff series against Dartmouth’s Steele Subaru on Feb. 23.

The team’s leading scorers in the regular season (Putnam had 22 goals and 22 assists, Sim had 15 goals and 26 assists), combined to give Pictou County a 1-0 lead at the Pictou County Wellness Centre; Putnam chased down a puck in the Dartmouth end of the rink, took a glance behind him and saw Sim cruising into the slot, all alone. Putnam’s pass went tape-to-tape and Sim buried it for a shorthanded goal, electrifying the PCWC.

“That was awesome,” Sim said of the atmosphere at the rink on Sunday.

“You don’t see that a lot in Midget (and) it really helps. We’re always energetic, but it was super loud in there.”

Dartmouth tied it with 34 second left in the period, but seconds later, Weeks got a break when a point shot from James Harrison found its way to the top of the net behind screened Dartmouth goalie Robert Forbes.

“A lot of playoff goals are right in front of the net,” said Putnam, a native of Masstown, Colchester County.“We put a lot of pressure on them and just kept throwing pucks at the net.”

Weeks applied that pressure for much of the period, but got into penalty trouble and gave up two power play goals, seeing their lead vanish.

Putnam would put them in front for good with three second left in the middle stanza, taking a crosscheck from behind, but not before one-timing a pass from the side of the Dartmouth net, as the home town fans have the locals another boost of adrenaline.

The cheers didn’t stop there; Lucas Canning gave Pictou County some breathing room midway through the third when he whipped a wristshot home, and from then on, Weeks worked the clock, getting pucks deep, not giving Dartmouth much room to operate.

It takes complete team effort to win a playoff series, but Sim and Putnam both led the way offensively. Sim had 10 points in the seven-games series (2G, 8A) and Putnam had six goals and three assists.

Next up is the South Shore Mustangs, who had the league’s best record in the regular season, but lost three out of their four games against Weeks. That series starts this coming weekend with two games in South Shore, before the teams return to the PCWC the following week.

“They have some great players, we’ve got to play like we did (against Dartmouth).”